You came this way: Home > Curator: Phoning It In > Portastatic 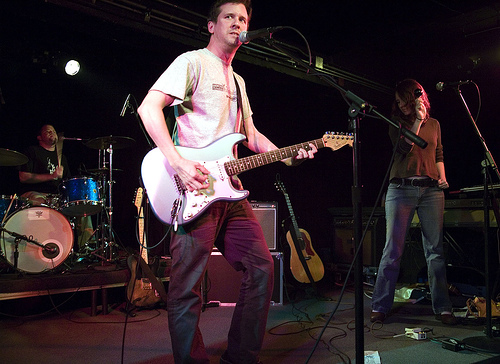 Portastatic playing at the Black Cat in DC, 2005
CC by DC John

Portastatic began in 1992 as a solo project for Mac McCaughan, lead singer and guitarist of the indie rock band Superchunk. Since then it has evolved into a full-fledged band, which sometimes includes Superchunk guitarist Jim Wilbur and McCaughan's brother Matthew.

Tom Scharpling of 18 Wheeler fanzine (and The Best Show on WFMU) was so impressed by McCaughan's solo material that he cajoled him into releasing it under the fanzine's own imprint; so came 1993's "Starter" 7". Since then, under the Portastatic moniker, McCaughan has recorded several records drawing on a number of genres, including traditional indie rock, lo-fi, soundtrack and Brazilian music.